I’ve started the modeling phase of my film. I’ve decided to start my prop modeling with the things that will be in the art studio, because that’s a model heavy set piece and I want to get the pieces out of the way earlier. More specifically I wanted to model the art supplies since they will be used in most of the scenes. Then next I’ll move on to the other pieces in that set. I also wanted to tackle some of the larger set pieces too.

I’ve blocked out the house and garage set pieces, as well as started modeling some of the accessories for the film. The house and garage are probably about 80% complete. All the major pieces are there. It just needs all the detail work that really adds character and completes the look and feel of the objects.

I’ve decided to start my prop modeling with the things that will be in the art studio, because that’s a model heavy set piece and I want to get the pieces out of the way earlier. More specifically I wanted to model the art supplies since they will be used in most of the scenes. Then next I’ll move on to the other pieces in that set.

I think when people start out making a film or a 3D scene on their own they forget about all the little pieces you need to add to sets to add a sense of realism. It truly is the little things that can make or break what you’re doing. Things should feel lived in, used, and sometimes even trashy. Not having these little details like crumpled paper and such on the floor of the studio make them look unused and like set pieces. This can have the effect of removing the audience from the story you’re trying to tell because they don’t believe in the world they’re viewing. So, always remember to focus on the little things, because every detail is important.

The previous post about the film’s progress can be found here.

After listening to some feedback and gathering my thoughts I took another crack at the story and overall design of this project. I feel like these steps create a more cohesive feel for this piece. While I feel that this is very much an organic process; always growing and changing I think that I’m at a point now that I can start moving onto the asset modeling.

If you want to see my original post on what the film is all about and my thoughts process behind making it you can find that here.

I have watched a lot of cartoons over the years. But one style of animation has always made me smile. I’ve admired the UPA style for years with classics like Mr. Magoo and Gerald McBoing Boing they really pushed the design of cartoons. So in honor of my love for this style this afternoon I created a self portrait. 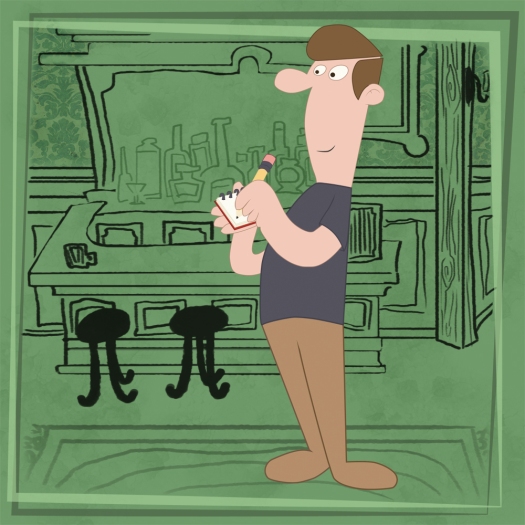 Update: I’ve done some proper storyboards and touch up the character designs. You can find the newer stuff here.

I’ve decided to make a short film in my spare time. So with a lot of determination and some help from friends I’m going to complete this film. I have a long road ahead, but I’ve been steadily making progress. Now that I’m into the 3D modeling I’ll start posting about the production process. The first place I started of course was with an idea I felt was worth sharing.

I wanted the film to tell a simple story through a complex use of color. I feel that a story and viewers’ moods can be enhanced by a smart use of color. This is no stunning revelation. People have been doing this in art and media for decades upon decades. The thing is I feel a lot of time that people don’t consider color enough.

Color is a great thing. Difference is a great thing. Variety is a great thing. This film is a little about color telling a story, but it’s a lot about how the act of something different coming into your world is a great thing. I feel adding new experiences and people into your life will make it better place. If people take anything away from this film I hope they take away this concept and don’t shun differences that enter their world but embrace them with passion.

For the look of the film I want it to be highly designed. Having a final product that looks like a modern day UPA cartoon. I feel like with the story I’m trying to tell and the way I want to tell it the modern art UPA style is the perfect fit. The reason I want to do this in 3D is to help create some richer character animation than would be in a traditional UPA cartoon. UPA was known for making more stylized animation, but I feel like having full rich character animation is needed because the characters drive the story and I want that push forward to be a strong bold statement. Below is a synopsis of the plot, some rough character designs, as well as my color script.

The world that the main character lives in is bland and monotone. As an artist this frustrates him, because he can’t produce beautiful vibrant art. In a fit of determination he leaves his studio to head to the park for inspiration. He initial observation leads him to more disgust over the bland and mundane; that is until he sees someone or something that really pops out of the blandness.